Kundali Bhagya’s Preeta aka Shraddha Arya to get married to a Navy officer on November 16?


The list of celebrities all set to get hitched is increasing day by day and one more name has been added to the same. It is that of actress Shraddha Arya who is quite popular for playing the role of Preeta in daily soap Kundali Bhagya. According to the latest reports, she is all set to get married to a Navy officer on November 16. Although no official confirmation about the same has been made yet by the actress, it is being said that the preparations are going on in full mode. Well, not just her but another actor from the show is all set to tie the knot. He is none other than Sanjay Gagnani who is seen playing the character of Prithvi will marry his fiance Poonam with whom he got engaged on February 18, 2018. Their union will reportedly take place on November 26 this year.

Coming back to the bride-to-be Shraddha, her wedding will take place in Delhi this month. She was known to have been dating Alam Singh Makkar with whom she even participated in Nach Baliyye 9. However, soon after the dance reality show got over, the couple called off their relationship.

ALSO READ: Dear Rajkummar Rao & Patralekhaa, we are waiting for your wedding pictures!

Meanwhile, Shraddha is quite active on social media and keeps on treating fans with stunning pictures and videos. Just recently she shared a video of herself dressed as a bride in a deep red lehenga. However, what caught attention was the reflection of a man capturing her clip on the phone. Captioning the same, she wrote, “One From The “R”chives.”

Not only this but her co-stars were even seen teasing her about the same. Actress Anjum Fakih, who plays the role of her sister in Kundali Bhagya commented, “Did I see someone there ? ” while Ruhi Singh wrote, “Dekho Dekho Woh aagaya.” 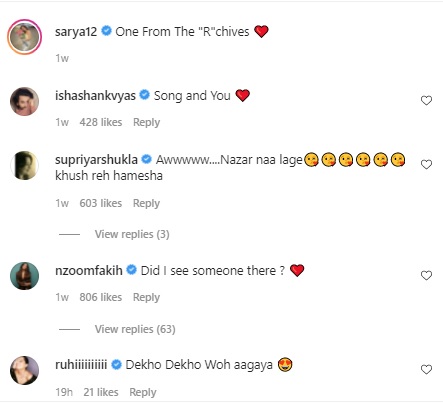