Nothing To See… Just A Gorilla Addicted To Smartphone 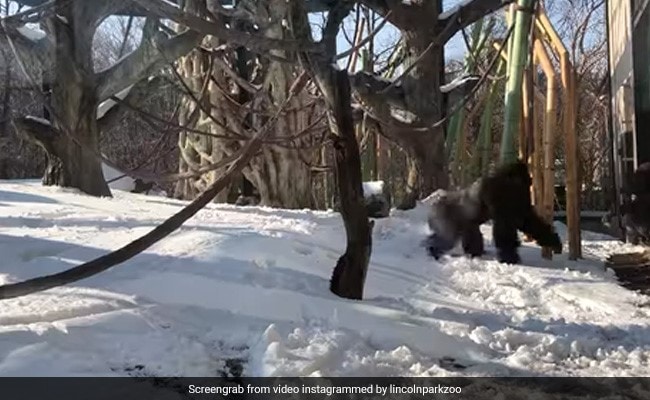 Amare tries to peep into visitors’ phones through the glass pane.

We know how much we struggle to cut our screen time every day. From setting timers for separate apps to getting back to other hobbies, people around the world are trying out different ways to cope with their smartphone addiction. But what can we do when a gorilla falls in love with the screen? The question may sound weird but here’s the reason we are wondering about it. A gorilla named Amare at Lincoln Park Zoo, Chicago, US has brought the Internet to a standstill with the news of its smartphone addiction. You heard it right. But, there is a twist. We aren’t talking about the gorilla’s personal smartphone.

Amare is addicted to the devices of visitors who show him pictures and videos, reported the Chicago Sun-Times.

Amare stays behind a glass enclosure with three others who are teenagers. But instead of taking an interest in them, Amare tries to peep into visitors’ phones through the glass pane. This has caused him to get distracted to an extent that Amare once did not notice that another gorilla was charging at him inside the enclosure, the report added.

Zoo authorities are concerned about Amare’s behaviour and are taking steps to reduce his screen time. According to Stephen Ross, who is the director of the Lester E Fisher Center For The Study and Conservation of Apes at the Lincoln Park Zoo, “It’s probably a cyclical phenomenon.” The ape’s growing interest in phones makes more visitors show him their phones, which further increases his addiction.

The zoo authorities are trying to reduce Amare’s screen time in whatever ways they can. Currently, they have put a rope between the glass partition and the visitors, reported Metro.

In spite of this, Amare can be seen getting by some smartphones sometimes. Whenever zoo officials notice it, they gently intervene and explain the situation to visitors.