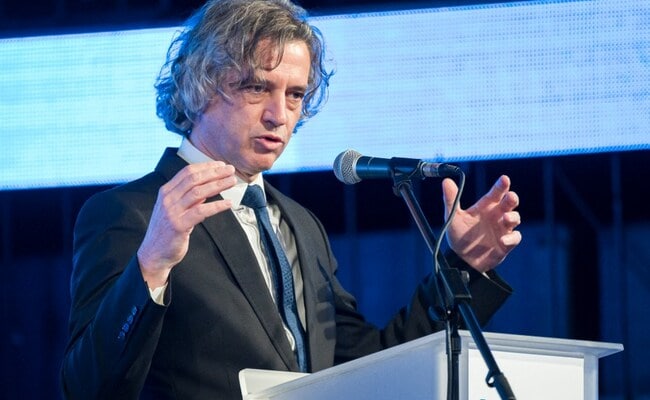 Slovenia polls: Robert Golob refuses to use Twitter “to avoid the temptation of fast fingers” (File)

Here is a look at the two men in the Alpine country of two million, which was the first ex-Yugoslav state to join the European Union in 2004.

Golob is a charismatic 55-year-old electrical engineer, who headed a leading state power company until last year when he was not re-appointed.

Recognised by his shoulder-length curly hairstyle, which Golob says he has had since his youth, he refuses to use Twitter “to avoid the temptation of fast fingers”.

During the campaign, he has toured the country in a bus, and his team has posted his messages and advertisements on Facebook and Instagram.

“Our objective has been reached: a victory that will enable us to take the country back to freedom,” Golob told cheering supporters after ballot results showed his party, the Freedom Movement (GS), got the most votes.

He was speaking via livestream from his home, where he is in isolation after testing positive for Covid-19.

With almost all the votes counted, GS stood at close to 35 percent, far eclipsing the close to 24 percent of Jansa’s Slovenian Democratic Party (SDS).

A former state secretary in charge of energy, Golob has also spent some time at the Georgia Institute of Technology in the United States with a Fulbright scholarship.

The father-of-three founded his own energy company in 2002 and ended up heading GEN-I, which promotes solar energy, from 2008 following a series of mergers.

But he was not re-appointed last year after the government increased its stake to become GEN-I’s major shareholder.

Although he had not been politically active since 2014, Golob in January took over a Green party to become its president, renaming it Freedom Movement.

The SDS went to great lengths to attack Golob, making much of his high salary, for example.

War, corruption scandals and a spell in prison — the career of veteran Slovenian right-wing leader Jansa has seen it all.

The 63-year-old avid mountain climber is known for his crowd-pleasing rhetoric and combative presence on Twitter, where he attacks opponents and mainstream media alike, echoing the tactics of right-wing populists elsewhere.

Like his close ally Hungarian Prime Minister Viktor Orban, the father-of-four is a veteran of the pro-democracy movements that brought about the collapse of communism.

He often accuses the old communist elite of exerting malign influence from the shadows.

Heading the anti-migrant SDS, Jansa has already seen a fair share of drama in his career. He served as prime minister between 2004 and 2008 and again from 2012.

But in 2013, only a year into his second term, he was forced out following a corruption scandal.

Sentenced to two years in jail for bribery, he ran as the SDS candidate for prime minister in parliamentary elections in 2014 from his prison cell.

A constitutional court later overturned his conviction and ordered a retrial, but it could not take place as too much time had elapsed.

Jansa then demanded compensation from the state for having lost the 2014 elections.

He became premier again in 2020 when his predecessor resigned amid coalition infighting.

“Ahead of the new government there are many challenges, but during our mandate we have set a solid ground for a peaceful navigation,” he said late Sunday.

In his most recent two years in office however, his government has clashed with Brussels over media freedom and rule-of-law issues. Jansa was largely sidelined when his country held the EU rotating presidency last year.

Tens of thousands of protesters have staged regular rallies since 2020, accusing Jansa of using the pandemic to attack media freedom and the judiciary and to undermine the rule of law.