Sunbathing Crocodile Shuts Down Runway At US Navy Airfield in Florida 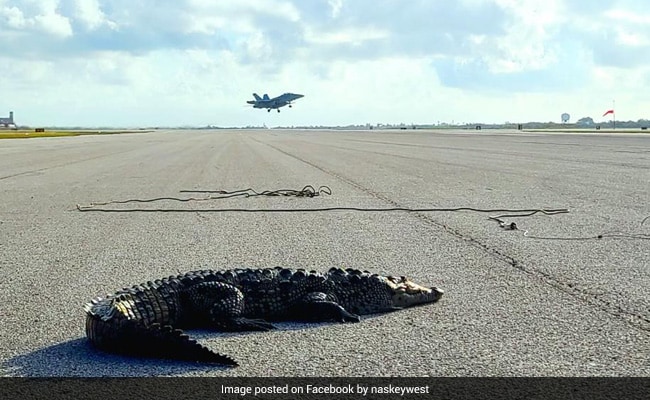 There are currently six or seven crocodiles on the naval base.

The US Naval Air Station (NAS) in Key West, Florida, was forced to shut down when a fairly large crocodile refused to leave the runway. Taking to Facebook, the NAS posted a photo of the seven-foot reptile on Monday. “Sunning Croc and Super Hornet,” read the caption.

“This airfield resident was soaking up some sun on one of our runways recently and didn’t want to budge. Wildlife Biologist Rosa Gonzales had to call in reinforcement from Florida Fish and Wildlife Conservation to move the stubborn American crocodile outside the fence line,” the post added.

According to The Independent, the officials at the bases said that the predator was safely relocated to another area. However, in the meantime, Navy jets had to land on a different runway, they added.

It is to mention that close encounters are not unusual at NAS Key West as it is located within the Florida Keys National Marine Sanctuary. Speaking to Miami Herald, NAS Spokesperson Danette Baso Silvers said, “We have crocs that live on our airfield and every once in a while they find themselves on the runway. Usually, they can make them scurry away. But this one was stubborn.”

Further, the NAS official said that the station, in fact, is home to at least half a dozen animals. Wendy Wheatley-Techmer, NAS’s natural resources manager, told Miami Herald that there are currently six or seven crocodiles on base.

Meanwhile, according to the Florida Fish and Wildlife Conservation Commission, American crocodiles primarily live in South Florida. Since 1957, the number of adult American crocs has jumped from less than 300 to more than 2,000.