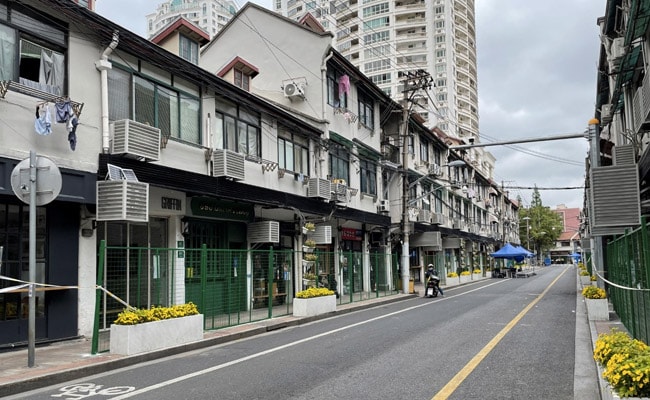 Authorities in Shanghai have erected fences outside the homes of people who have tested positive.

Authorities in Shanghai, which is battling one of the worst COVID-19 outbreaks, have erected fences outside the homes of people who have tested positive, according to New York Post. This has sparked an outcry on Chinese social media platforms that people are being treated like animals amid a harsh lockdown, the publication further said.

“This is so disrespectful of the rights of the people inside, using metal barriers to enclose them like domestic animals,” it quoted a resident as saying.

Many users on Weibo and other Chinese social media platforms have posted images of Chinese healthcare workers installing green metal bars outside residential buildings to stop people from coming out.

These green barriers have appeared without warning. They have been installed around buildings designated as “sealed areas” where at least one person has tested positive for COVID-19, reported the BBC.

According to news agency Reuters, nearly 40 individuals lost their lives due to coronavirus in Shanghai on Saturday – the city’s highest number since the outbreak of the highly transmissible Omicron variety prompted a harsh lockdown.

Those who test positive are forcibly picked up from their homes and sent to quarantine centres.

The country’s government has set up very strict rules for COVID-19 patients since the first wave of the pandemic. This has irked the residents of Shanghai, and videos of apartment dwellers posted on social media showed them yelling from the balconies.

After these videos surfaced, authorities sent drones to warn people to behave properly. Robot dogs and healthcare professionals have also been patrolling the streets to ensure people remain inside their homes.

Health official Pang Xinghuo told news agency AFP that preliminary observations suggested Covid had been “spreading invisibly” in the city for a week, “increasing the difficulty of prevention and control”.

Nearly a quarter of Beijing’s active cases are people over 60, and half of the infected seniors have not received Covid vaccines, Pang said.

Beijing has also imposed tight controls on entry to the city, with travellers required to have a negative Covid test from within 48 hours.