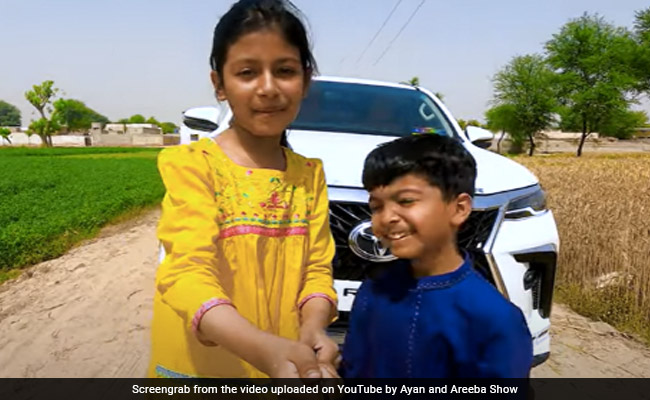 An eight-year-old boy driving a Toyota Fortuner SUV in Pakistan.

A video is going viral on social media which shows an eight-year-old boy driving a Toyota Fortuner SUV in Pakistan.

The youngster is seen in the video with his 10-year-old sister. The girl introduces herself and her brother, saying they have arrived in their village and that they would show how his brother, who is eight years old, drives the car with ease.

A YouTube channel named “Ayan and Areeba Show” shared the video three weeks ago with caption, “Today we will show you how an 8-year-old child can drive Toyota Fortuner. Anyone who saw Ayan driving was shocked, the video went viral.”

The video has been viewed thousands of times. Some users praised the boy for his driving skills, while others criticised him.

“If it was India, kid’s father would have got arrested by now,” another user commented.

“Nothing good to portray about,” a third user said.

The video shows Ayan, wearing a blue ‘pathani’, opening the SUV’s door and driving along the road with a few other vehicles. Due to his small height, the 8-year-old is seen sitting on the edge of the seat so that he can reach the gas and brake pedals.

He appears to be highly confident in his driving skills as he drives the car with a smile on his face. When asked, he reveals that he had been driving since he was six years old.

Pakistan too has similar age restrictions for drivers. Both the countries give permanent driving licence only to those who are 18 years of age.

9 years of Aashiqui 2: 9 memorable dialogues of Aditya Roy Kapur that live rent-free in our minds