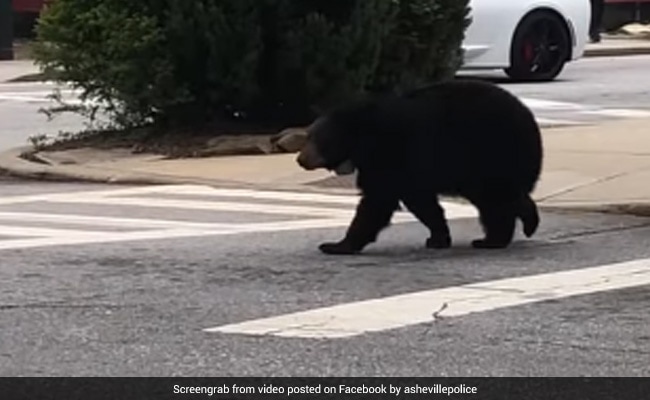 A bear can be seen strolling around streets of a city in North Carolina, the United States.

One such incident is going viral on social media where a bear can be seen strolling around streets of a city in North Carolina, the United States. It may seem odd to see a bear in the centre of a busy city full of people, but that is exactly what happened in Asheville.

This video, captured by the officials of Asheville Police Department, was shared on Facebook on April 22.

“APD officers responded to an unusual call Thursday afternoon of a bear milling around downtown and then eventually climbing a tree in the Pritchard Park area. The black bear, wearing a Wildlife enforcement tracking collar, seemed to want a day in the park, where lots of people were enjoying their day downtown,” the police department’s post said.

“Officers wanted to help get the bear safely out of the area by helping give the bear space to mosey along. At one point the bear even crossed the street by using the crosswalk. Although officers appreciated the law-abiding bear, it was important to get the bear back to a wooded area for safety,” it further said.

“This is the third incident APD officers have assisted in getting bears out of the downtown area in the past three weeks. Always be aware of your surroundings,” the post mentioned.

Surprised users appreciated the efforts put in by the police department. “I loved the video I watched where APD Officer was walking the bear down the street… Thanks Asheville PD,” said a user on Facebook.

“It was funny while watching a video of the bear. At one point It looked like if the bus had stopped and the doors had opened, he just about would have gotten in,” commented another.

As soon as the bear managed to cross the road, it climbed a tree in a park area.