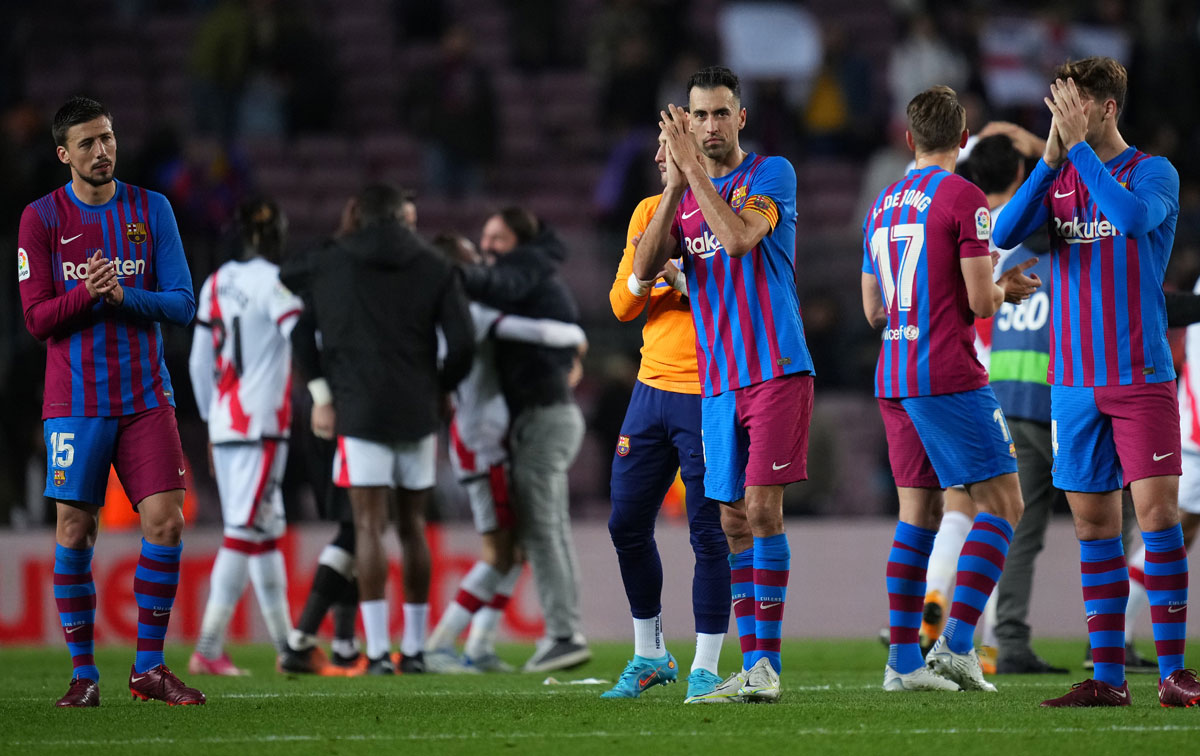 IMAGE: The dejected Barcelona players after losing their match against Rayo Vallecano at the Camp Nou on Sunday. Photograph: Alex Caparros/Getty Images

Rayo Vallecano forward Alvaro Garcia netted an early goal to give his side a surprise 1-0 win against Barcelona at the Camp Nou on Sunday, moving Real Madrid another step closer to sealing their 35th LaLiga title.

Garcia sealed the game for the visitors when he opened the scoring in the seventh minute, receiving the ball inside the box and rifling it past goalkeeper Marc-Andre ter Stegen to a wave of whistles at the Camp Nou.

Barcelona failed to convert a number of golden chances despite going agonisingly close to an equaliser with the referee playing 14 minutes of stoppage time at the end of the second half.

“These mistakes cannot be repeated and they have happened to us again. They are very good opportunities that we let pass us by,” Barcelona coach Xavi Hernandez told reporters.

“I leave angry, disappointed, because today was … a repeat of what happened against Eintracht (Frankfurt), as well as Cadiz. We lacked a lot of effectiveness.”

Real Madrid now need only one point from their last five games to secure the title, while Barcelona, who suffered their third home defeat on a row, are second on 63 points, 15 behind Real and level with Sevilla in third. 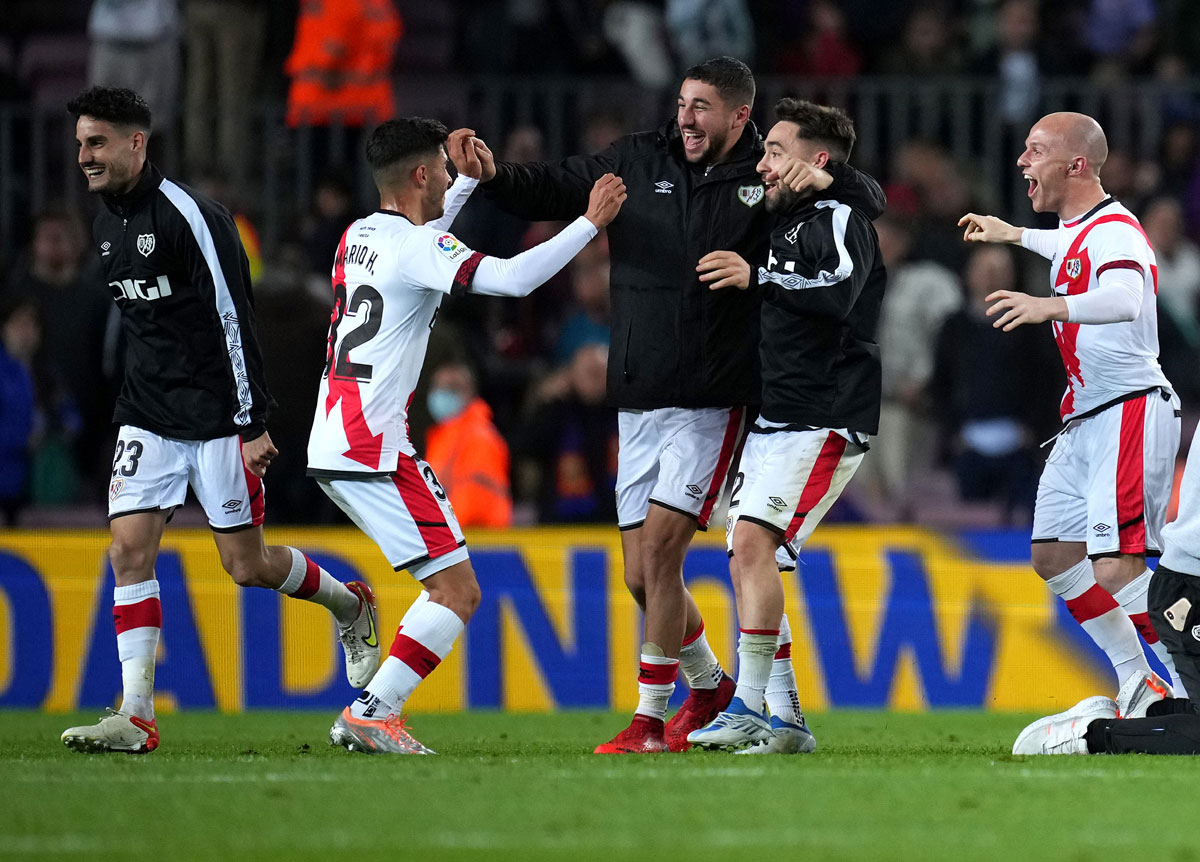 IMAGE: Rayo Vallecano moved up to 11th from 14th in the standings. Photograph: Alex Caparros/Getty Images

Barcelona had a good chance to level in the 25th minute but a strike by defender Jordi Alba from the edge of the box was just off target, touching the outside of the right post.

Gavi then lashed the ball against the crossbar in the 42nd, while Spain international Ferran Torres netted on the follow-up but his effort was disallowed for offside.

Xavi introduced three forwards off the bench in the second half as Memphis Depay, Adama Traore and Luuk de Jong all came on before the 71st minute.

Traore caused a scare in the Rayo defence in the 76th minute with a stunning cross into the penalty area, but it was cleared to safety by Rayo winger Isi.

Four minutes later Depay tried his luck from the edge of the box but his shot, straight down the middle of the goal, was saved by goalkeeper Stole Dimitrievski.

Barcelona continued to press in stoppage time and threatened a number of times, but Rayo clung on for the three points which steered them further away from the relegation zone.

“I think we generated many clear chances to at least equalise. If we equalised with enough time, I think we would have won it. We have complicated our own qualification for the Champions League,” Xavi added.

Barca next host relegation-threatened Mallorca on Sunday. Rayo, who moved up to 11th from 14th in the standings following the game which was originally scheduled to be played in January, are home to Real Sociedad earlier that day. 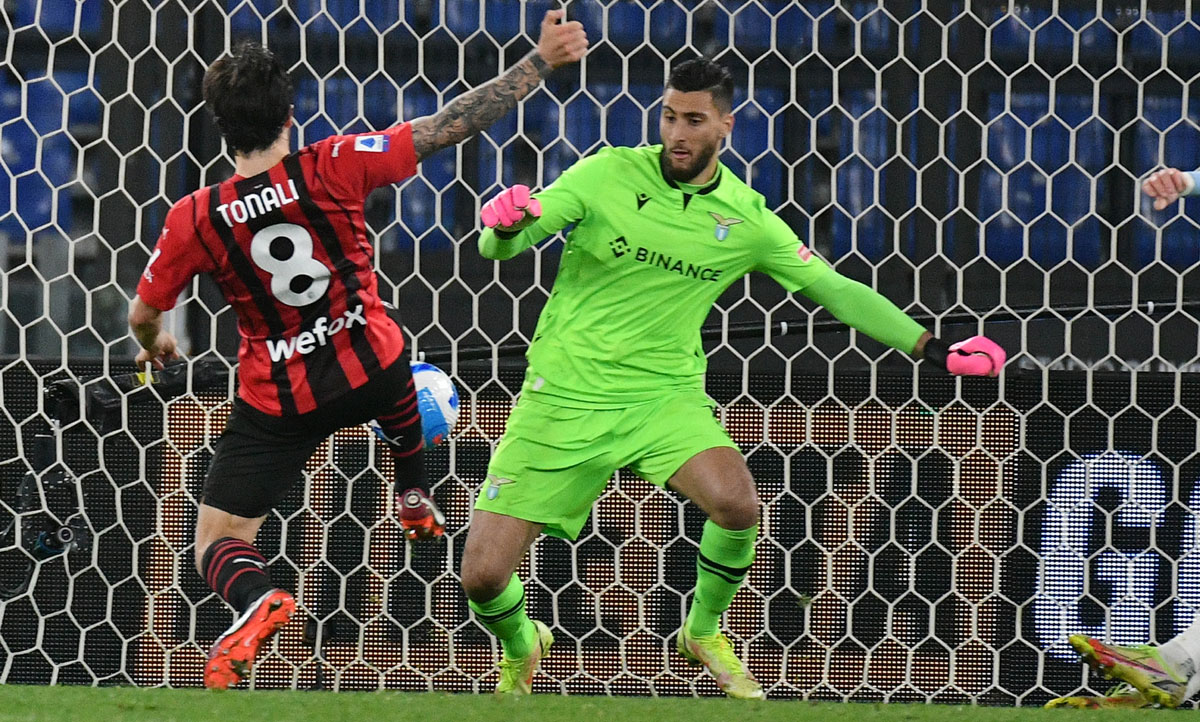 A dramatic, last-gasp winner from midfielder Sandro Tonali earned AC Milan a crucial 2-1 comeback victory at Lazio on Sunday, as Stefano Pioli’s side climbed back to the top of the Serie A standings.

Champions Inter Milan had gone top with a convincing 3-1 win over AS Roma on Saturday — their third league victory in a row — putting pressure on Milan to respond in a tricky-looking trip to the capital to take on the unpredictable Lazio.

They soon found themselves behind, when Italy striker Ciro Immobile poked home in the fourth minute to give the home side the lead.

Milan had plenty of chances to equalise in the first half, firing 12 shots on Lazio’s goal in the opening period, but they could not make one count.

The visitors kept coming after the break, with the pressure telling as French striker Olivier Giroud fired Milan level in the 50th minute.

Veteran striker Zlatan Ibrahimovic came off the bench in search of a winner, with the Swede turning provider for Tonali right at the death to spark wild scenes of celebration among Milan players and staff.

Come the end of the season, this may prove to be a crucial success should Milan win their first Scudetto since 2011, with Pioli’s side now back top, two points clear of second-placed Inter, who have a game in hand. Lazio stay seventh on 56 points.

A jubilant Pioli heaped praise on his side, saying: “It is right to be satisfied and happy for our players who are lions.

“They get too little credit but they are proving to be very strong,” he told DAZN. “There are four games to go, all of them must be won, I don’t know if we will succeed but we are very strong.

“There is no team that is so young and fighting for the Scudetto. I ask the guys for a last effort, now we have to throw ourselves into the championship. Let’s play the next one to the maximum, it is useless to think too far ahead.”

Elsewhere in Serie A on Sunday, Salernitana, for so long bottom of Serie A, got their third successive league win — a 2-1 victory over Fiorentina — to move up to 18th, three points from safety.

A 10-Year-Old Is Under Trial In China. Reason: Leaking “State Secrets”