Abortion Rights Supporters, Opponents Face Off At US Supreme Court 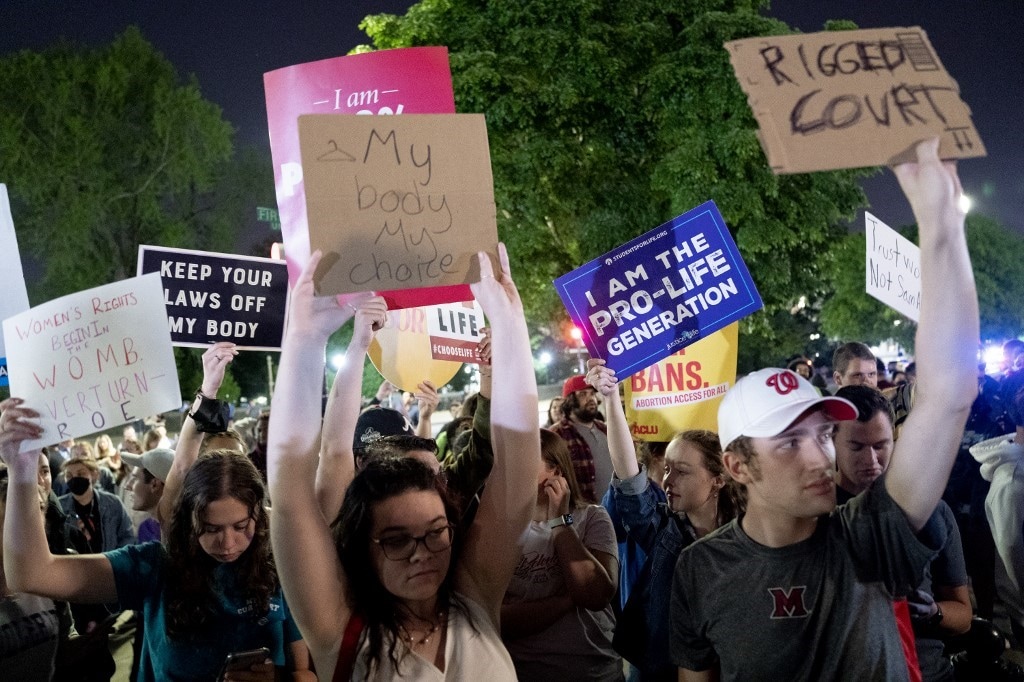 US abortion rights: The two groups chanted slogans in front of the US Supreme Court.

Hundreds of pro-choice and anti-abortion activists gathered in front of the US Supreme Court on Monday night, hours after a stunning leak of a draft opinion that signals the institution may be set to strike down the right to abortion.

According to the draft majority opinion obtained by news outlet Politico, the top US court is poised to overturn the historic 1973 Roe v. Wade ruling that enshrined the right to abortion in the United States. Squaring off on either side of the white marble building a stone’s throw from the Capitol, the pro-choice and anti-abortion groups railed at each other.

“Roe v. Wade is going to go,” anti-abortion protesters taunted, while the pro-choice crowd yelled: “My body, my choice.”

The two groups chanted and waved placards in the plaza in front of the steps to the Supreme Court, with barriers and a few uniformed police officers barring access to the colonnaded building.

Abby Korb, a 23-year-old graduate student and congressional aide, said she was “in literal shock” when the news broke and quickly headed to the Supreme Court with a friend.

“I’m a woman and my rights are being taken away every single day,” she told AFP.

Like many others at the spontaneous demonstration, Korb, originally from Wisconsin, is now calling for legislation at the federal level to protect access to abortion.

“We need access to safe abortion because making it illegal isn’t going to stop it, it’s just going to make it more dangerous,” she said.

The growing crowd took turns to hurl expletives at Supreme Court Justice Samuel Alito, who reportedly wrote the opinion, and called on Democratic Party leaders to “do something”.

Madeline Hren, a 25-year-old from North Carolina, said she was very angry. “I called everyone I knew to be very angry,” she said, holding a small sign with a drawing of a bloody coat hanger that said “We will not go back.”https://www.ndtv.com/”I’m really upset about it… I didn’t cry. I’m mostly just mad,” said Hren, who works for the UN Foundation.

She now fears that an abortion ban will extend to her native North Carolina.

For opponents of the right to abortion, however, it was time to celebrate.

“You don’t care if people die,” they sang at the pro-choice crowd.

“I hope they overturn it,” said Claire Rowan, a 55-year-old mother of seven children, some of whom accompanied her to the demonstration.

Rowan said she hopes people will now be “asking God for forgiveness so that the nation can heal.”

Obstacle Racing to Be Tested as Equestrian Replacement in Modern Pentathlon

World Asthma Day 2022: Women At Higher Risk Of Asthma Attacks Or Death Due To It, Report Says

World Asthma Day 2022: Women At Higher Risk Of Asthma Attacks Or Death Due To It, Report Says