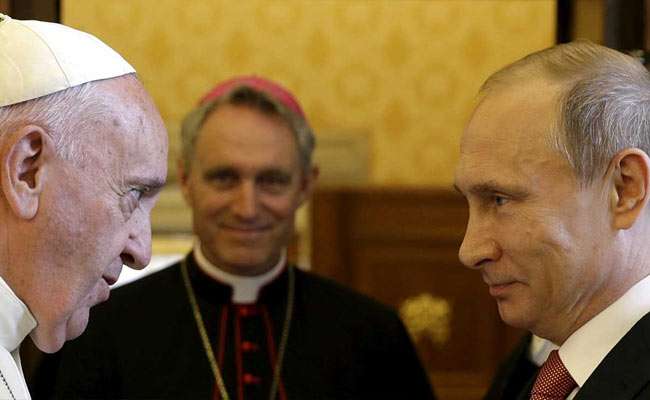 Pope Francis said he would not be travelling to Ukraine anytime soon. (File)

Pope Francis said Tuesday he has requested a meeting in Moscow with Russian President Vladimir Putin over the Ukraine war but has heard nothing back.

The 85-year-old told Italy’s Corriere Della Sera newspaper that he had sent a message to Putin around 20 days into the conflict saying “that I was willing to go to Moscow”.

“We have not yet received a response and we are still insisting, though I fear that Putin cannot, and does not, want to have this meeting at this time,” he said.

The pope has repeatedly called for peace in Ukraine and denounced a “cruel and senseless war” but without ever mentioning Putin or Moscow by name.

The head of the Roman Catholic Church also said he would not be travelling to Ukraine anytime soon.

“I’m not going to Kyiv for now. I feel I shouldn’t go. I have to go to Moscow first, I have to meet Putin first,” he said.

Dialogue with the Orthodox Church, which separated from the Catholic Church in 1054, is a stated priority of Francis’s pontificate.

But since Russia’s invasion of Ukraine on February 24, the pope’s calls for peace have contrasted with Kirill’s approach.

Kirill has defended Putin’s “military operation” in Ukraine and the fight against Russia’s “external and internal enemies”.

Suniel Shetty’s daughter Athiya and KL Rahul to get married in December?

Suniel Shetty's daughter Athiya and KL Rahul to get married in December?