The Court Case That Paved Way For Abortion Rights In US 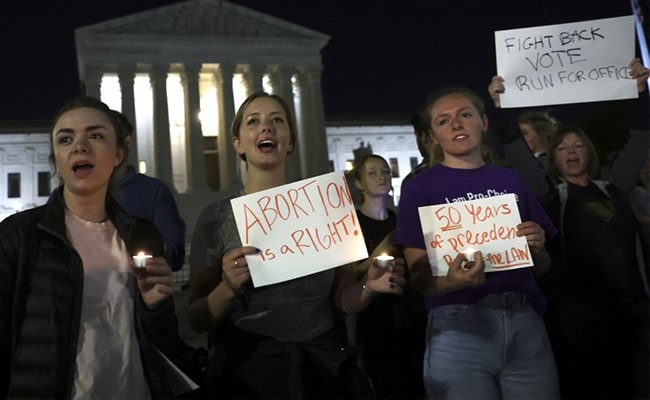 The US abortion right was later confirmed in a number of decisions.

A US Supreme Court draft opinion leaked to the press on Monday suggests a majority of justices are ready to overturn the landmark Roe v. Wade, shredding nearly 50 years of constitutional protections on abortion rights.

Here is how the original 1973 court case played out.

On January 22, 1973, the court decided that the constitutional right to privacy applied to abortion.

Roe was “Jane Roe,” a pseudonym for Norma McCorvey, a single mother pregnant for the third time, who wanted an abortion.

She sued the Dallas attorney general, Henry Wade, over a Texas law that made it a crime to terminate a pregnancy except in cases of rape or incest, or when the mother’s life was in danger.

Filing a complaint alongside her was Texas doctor James Hallford, who argued the law’s medical provision was vague, and that he was unable to reliably determine which of his patients fell into the allowed category.

The “Does,” another couple, childless, also filed a companion complaint, saying that medical risks made it unsafe but not life-threatening for the wife to carry a pregnancy to term, and arguing they should be able to obtain a safe, legal abortion should she become pregnant.

The court heard arguments twice, and then waited until after Republican president Richard Nixon’s re-election, in November 1972.

Only the following January did it offer its historic seven-to-two decision — overturning the Texas laws and setting a legal precedent that has had ramifications in all 50 states.

Justice Harry Blackmun, writing for the majority, said the court recognized the “sensitive and emotional nature of the abortion controversy, of the vigorous opposing views, even among physicians, and of the deep and seemingly absolute convictions that the subject inspires.”

But he argued that the “right of privacy… is broad enough to encompass a woman’s decision whether or not to terminate her pregnancy.”

“A state criminal abortion statute of the current Texas type, that excepts from criminality only a lifesaving procedure on behalf of the mother, without regard to pregnancy stage and without recognition of the other interests involved, is violative of the Due Process Clause of the Fourteenth Amendment,” the ruling read.

But the top court agreed with lower court rulings that the right to privacy with regard to pregnancy “is not absolute, and is subject to some limitations.”

“At some point, the state interests as to protection of health, medical standards and prenatal life become dominant,” Blackmun wrote.

The top court thus ruled partially against the doctor and the Does, but in favor of Jane Roe, who has since become a pro-life activist.

On the same day, the justices ruled in the separate “Doe v. Bolton” case, which authorized each state to add restrictions to abortion rights for later-term pregnancies.

The constitutional right to abortion was later confirmed in a number of decisions, including “Webster v. Reproductive Health Services” in 1989, “Planned Parenthood v. Casey” in 1992 and Stenberg v. Carhart” in 2000.

Johnny Depp was to get $22.5 mn for ‘Pirates 6’ before Amber Heard allegations, says agent

Johnny Depp was to get $22.5 mn for 'Pirates 6' before Amber Heard allegations, says agent