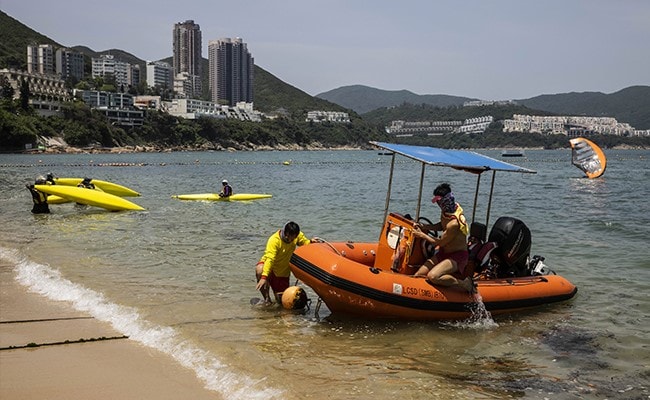 Filipino domestic worker Marites Saliganan loves getting outdoors on her one day off a week, and after Hong Kong’s government lifted a pandemic ban on gathering at beaches on Thursday, she and her friends headed for the sand.

Nestled on the southern side of Hong Kong’s main island, the wealthy town of Stanley offers a welcome respite from the city with its low-rise houses and seaside eateries.

But anyone venturing onto the beach in the last seven weeks faced hefty fines, as the city imposed its strictest social distancing measures yet to curb a virus outbreak earlier this year.

“We are so happy because today is the day of reopening the beach,” Saliganan, sporting a wide-brimmed hat, told AFP.

While much of the world began adjusting to living with the coronavirus, Hong Kong has gone in the opposite direction, hewing to a lighter version of China’s zero-Covid strategy.

A wave of the highly transmissible Omicron variant began tearing through the city’s defences in January.

It killed more than 9,000, mostly unvaccinated elderly people, and forced the reimposition of painful social distancing curbs that have plunged Hong Kong towards another economic recession.

Playgrounds and park benches were taped up, swimming pools closed and groups of police patrolled the open spaces, issuing fines to those caught breaching the rules.

In recent weeks, some of the restrictions have eased, including a ban on evening dining inside restaurants and the reopening of businesses like gyms and cinemas.

On Thursday, authorities reopened beaches and allowed people to exercise outdoors without masks for the first time in months.

Bars and nightclubs remain closed but are set to reopen soon.

Under the latest rules, eight people can now dine at a restaurant but no more than four people can gather in a public place and mask wearing remains mandatory outdoors.

A 70-year-old resident who gave his surname as Choi was one of a handful of elderly swimmers to flock back to Deep Water Bay.

“I was stuck at home, phoning friends, watching dramas,” he told AFP.

“I can see my friends again, they are all like brothers to me. We have been swimming here for decades,” he added.

Another swimmer, surnamed Ho, 85, said he found the closure of the beaches baffling.

“There’s no reason to lockdown beaches, there are so few people that were infected from being on beaches,” he said.

The vast majority are women from the Philippines and Indonesia who cook, clean and care for Hong Kong families, living alongside their employers in the city’s notoriously small apartments.

They are only entitled one day off a week and many tended to gather in parks and beaches.

During the pandemic, police frequently patrolled areas where domestic workers would gather, issuing spot fines that could cost them up to a month’s salary.

With the beaches closed, Salignan said she and her friends had no outlets for recreation, particularly with strict police monitoring.

“This affected mental health,” she said.

But now, she and her friends are just pleased to be outdoors again.

“We are so very, very happy to celebrate the birthday of my friend,” she said throwing her arms in the air.