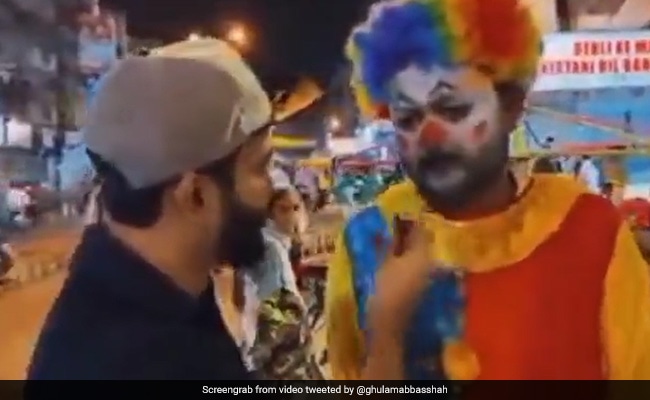 The power of music is one that transcends geographical boundaries. A man from Karachi, Pakistan, proved this recently in a video that has been doing the rounds on social media. In the video, the man dressed as a clown, is seen performing on the streets of Karachi, when he is spotted by popular Pakistani YouTuber Ahmed Khan, who invites him for a quick chat.

In the course of their conversation, the man, identified as Arif Khan, tells Ahmed Khan that it is his business to make children laugh with his garb and performance. When asked what else he does, the man says he sings.

The YouTuber then asks the man if he could sing for the camera and he does, leaving Ahmed Khan — and now the viewers — visibly impressed with his talent.

The man picked the song Abhi Mujh Mein Kahin from the 2012 Hindi movie Agneepath and performed it beautifully, as is evident from the number of comments under the clip praising him.

Following this, he was also asked whether he could perform a Pakistani artist’s song. To this, he said that sings songs by Rahat Fateh Ali Khan and chose to go with Zaroori Tha.

The viral video was shared with a quote tweet by Bollywood writer-comic Varun Grover who used the opportunity to praise Arif Khan as well as Amitabh Bhattacharya, who wrote the lyrics for the Ajay-Atul composition, Abhi Mujh Mein Kahin.

The original tweet shared by Varun Grover was posted by a user named Ghulam Abbas Shah, a Pakistan-based journalist on May 3. It said, “#VideoOfTheDay This is Arif Khan from Karachi. What a beautiful human being and what a beautiful voice.

Replying to the tweet, people from both India and Pakistan praised the man’s performance.

One user said, “Such a beautiful voice, and such effortless, sukoon-bhari (pleasing) singing!”

Such a beautiful voice, and such effortless, sukoon-bhari singing!

“Heard this song hundreds of times. But this suddenly gave me goosebumps!” another user said.

Heard this song hundreds of times. But this suddenly gave me goosebumps! ♡

One comment noted that Arif Khan had rendered the song with “much love and emotions”.

Amazing lyrics and rendered with so much love and emotions ????

Leaving words of encouragement, one user wrote, “Compulsions of worldly responsibility has chained another budding talent. Time to blossom, bro. Go for it.”

Compulsions of the worldly responsibility has chained another budding talent.
Time to blossom, bro…
You gave way forward. Go for it