New Delhi: In what comes as another major setback for Delhi Capitals (DC), their star opener Prithvi Shaw has been admitted to hospital due to high fever. Shaw, who missed out on being part of Delhi’s playing XI in their previous match, was expected to make his much-awaited comeback in Delhi’s Indian Premier League (IPL) 2022 match against Chennai Super Kings (CSK) on Sunday. It is highly likely that Shaw will be replaced by Mandeep Singh to open for Delhi in his absence.

It is not known when exactly was Prithvi Shaw hopitalised. The news broke out only when the star batter himself took to Instagram to reveal this to his fans on Sunday.

“Admitted in hospital and recovering from fever. Thank you all for your good wishes. Will be back in action soon,” Shaw wrote in the caption of his post in which he can be seen resting on a bed in a hospital. 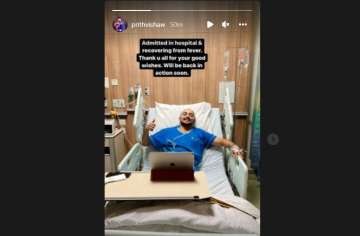 Indian Premier League (IPL) 2022 has so far been very good for Prithvi Shaw. He has scored 259 runs in 9 matches at a strike rate of 160. Shaw has also scored two half-centuries this season. Due to poor health, Prithvi Shaw had also missed the match against Sunrisers Hyderabad (SRH) and will also be out of tonight’s important match against Chennai Super Kings (CSK).

Shaw not being available for tonight’s match is not good news for Delhi Capitals. Delhi needs to win their remaining four matches to make it to the IPL 2022 playoffs and their in-form star opener is out of the team. Prithvi Shaw along with David Warner has given the team a good start many times this season.

Earlier in the day, a net bowler of Delhi Capitals tested positive for Coronavirus, the Indian Express reported. Following the sad development, Delhi Capitals team will have to go through another round of testing and till then all the players will remain isolated in their rooms as per the Covid protocol made by the BCCI for IPL 2022.