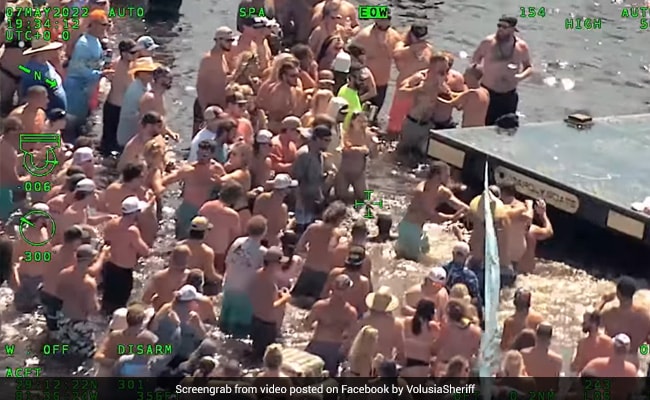 Arrests were made and several citations and warnings were issued.

A wild video has surfaced online which shows huge crowds and violent fights at a boat party in Florida, US. According to WTSP, brawls broke out on Saturday at an annual event aptly named “Mayhem at Lake George”. In the aerial video, shared by the Volusia County Sheriff’s Office, one can see hundreds of boats at Lake Geroge surrounding a crowd of people with a floating DJ stage in the middle.

As per the report, the event was hosted by Florida Watercraft Events. The video captured by the sheriff’s office shows groups of people throwing punches on a barge that held a DJ booth. As the camera zooms in, four to five men can also be seen pushing people off the platform and into the water.

The brawl left one person possibly unconscious. In the clip, one officer can be heard describing the man laying on the DJ deck as “pretty bloodied up”. “We’re gonna need rescue. We got one guy on the deck, looks like he’s unconscious, bleeding heavily from the face,” a deputy continued, adding, “Lot of blood coming from the head and face.”

According to WTSP, the sheriff’s office said that they responded to the event with help from multiple local law enforcement agencies, including the Florida Fish and Wildlife Conservation Commission, US, Coast Guard, County of Volusia Fire Department and the Seminole, Orange, Lake and St, John’s County sheriff’s offices. The police also informed that arrests were made and several citations and warnings were issued.

Separately, Wesh reported that before making the arrests, the law enforcement made 42 stops during the event, giving 50 warnings, and writing eight citations for Boating Under the Influence. The sheriff reportedly said that even though the majority of the crowd was well behaved, there were a handful of arrests.

Explained: Can Elon Musk Renegotiate A Lower Price For His Twitter Deal?