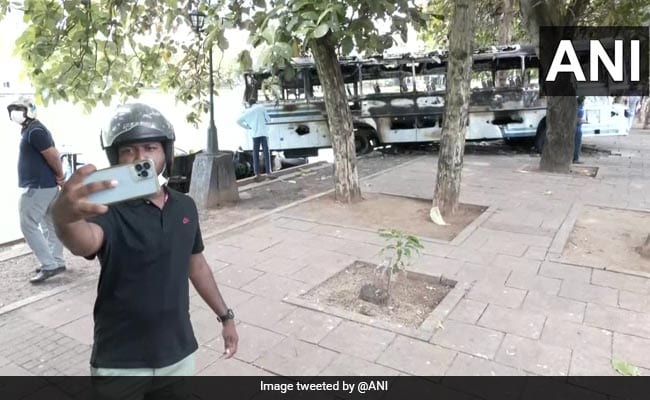 Sri Lanka: A man takes a selfie near a bus that was set on fire by protesters.

Amid the ongoing political crisis in Sri Lanka, including large scale anti-government protests that turned violent on Monday, the country has found for itself new selfie points near burnt buses and cars submerged in ponds outside the Prime Minister’s residence in Colombo.

Outside the office of the Prime Minister near Temple Tree, which was not till long ago occupied by the now-former Prime Minister Mahinda Rajapaksa, people were seen walking on the streets with their families. Cars submerged in the ponds too became an attractive selfie point for them.

People were also seen taking selfies near the buses that were set on fire by the protesters.

After three days of curfew in the Island nation, the defence forces of Sri Lanka on Tuesday were ordered by President Gotabaya Rajapaksa to shoot at sight all those who plunder public property or cause personal harm.

“I am not going to school for four days due to the ongoing protest in Colombo and today we are here with my family, I have taken many selfies here to show my friends,” Asma Ismat, a young girl, told news agency ANI.

“People are taking a selfie here because they want to take it as a memory, many people could not join the protest due to some reason… taking a selfie is showing solidarity with the protesters,” said Clifford, a private corporate company employee, who stopped his motorbike in the area to take selfies.

The protests in Sri Lanka, which were going on relatively peacefully for weeks, turned violent on Monday after alleged attacks launched by the ruling Sri Lanka Podujana Peramuna (SLPP) loyalists on anti-government protesters near the Temple Trees and at the Galle Face Green in Colombo.

Mahinda Rajapaksa and some of his family members were shifted to Trincomalee Naval Base, a day after he resigned following violent protests.

Several buses were burnt and cars fell into ponds near the PM’s residence in Colombo. Yet people continue to protest against Sri Lanka and demand President Gotabaya Rajapaksa’s immediate resignation in connection with the worst economic and political crisis in the country.

Sri Lanka is facing its worst economic crisis since independence with food and fuel shortages, soaring prices and power cuts affecting a large number of the citizens, resulting in massive protests over the government’s handling of the situation.

The recession is attributed to foreign exchange shortages caused by a fall in tourism during the COVID-19 pandemic, as well as reckless economic policies, like the government’s move last year to ban chemical fertilizers in a bid to make Sri Lanka’s agriculture “100 per cent organic”.

Amid the political and economic crisis, the leader of the Opposition Sajith Premadasa, who had earlier demanded the resignation of President Gotabaya Rajapaksa before assuming Prime Ministership, has written an open letter to the President that he is ready to assume the office of Prime Minister of Sri Lanka if Gotabaya Rajapaksa resigns within a stipulated time after Mr Premadasa assuming office.