Caught On Camera: Water Slide Snaps In Half, Throws People 30-Feet Down 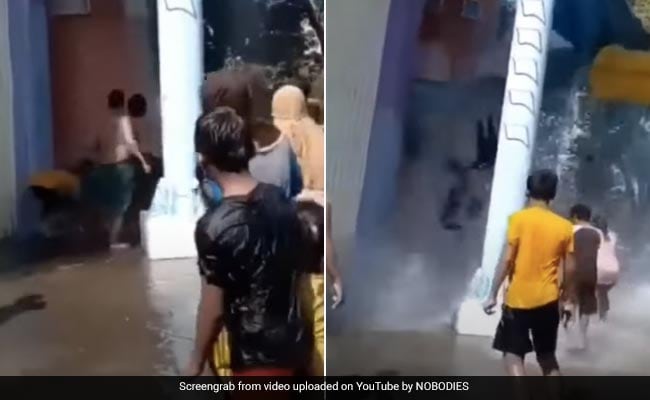 Most recent maintenance check of the ride happened over nine months ago.

A terrifying moment was caught on camera in Indonesia’s Kenjeran Park where a huge water slide snapped in half and crashed to the ground.

According to Daily Star, those who were trapped inside the water slide were thrown 30-feet to the ground in front of stunned onlookers. Horrifying footage of the incident, which happened on May 7, has gone viral on social media. It shows one section of a spiralling enclosed tube slide collapsing and onlookers screaming as swimmers fell to the concrete floor.

Out of 16 people who were trapped inside the slide, eight of them were taken to a nearby hospital, and three of those suffered broken bones, Daily Star reported. The water park, located in Surabaya city, reportedly said that the accident happened because the ride had worn out and weakened over time.

The authorities also admitted that the slide was “overloaded” with people too when the incident took place. The water park informed that the most recent maintenance check happened more than nine months ago.

Also Read | Rollercoaster In US Gets Stuck, Riders Left Hanging Upside Down For Nearly 45 Minutes

The incident prompted the deputy mayor of Surabaya city, Armuji, to call for an immediate inspection of other amusement parks in the region as well in order to prevent similar accidents from taking place in the future. As per the media outlet, the deputy mayor reminded the owners of amusement parks to take responsibility and follow necessary safety measures to protect the well-being of their visitors.

Daily Star reported that Mayor Eri Cahyadi, on the other hand, said, “The Surabaya City Government will provide trauma-healing assistance to be carried out by the offices to all victims. They are accompanied until full recovery.”

Moreover, Mr Cahyadi also added that the park’s management would be held responsible for the accident and that they would be tasked with footing the bill for medical expenses occurred by anyone involved until the victims are “all fully recovered”. He even went on to call for more clarification from the park’s management and ordered a police investigation into the cause of the slide collapse.

Rags to riches: Pankaj Tripathi says he started his career with ‘smallest roles’