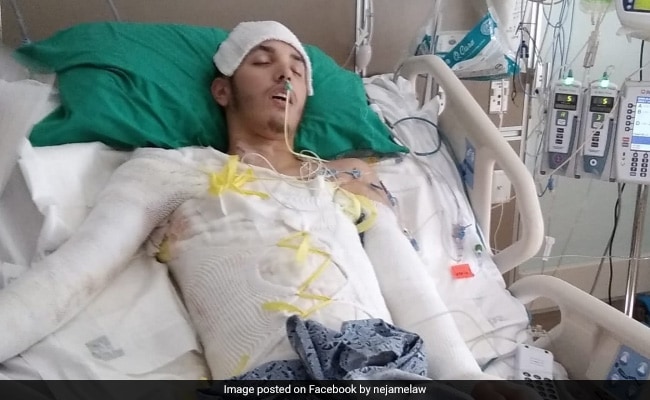 Mr Barreto has had six gruelling surgeries since February.

A Florida man is clinging to life after a sheriff’s deputy tased him at a gas station, sparking a fire that “cooked” the victim alive, his lawyers said.

Taking to Facebook, NeJame Law offices in Orange County, Florida, described how 26-year-old Jean Barreto sustained third-degree burns after the incident where officers had tackled the man from his bike while he was filling up his motorcycle, suspecting that he was a member of a biker gang that had been called in earlier for harassing other drivers. The incident took place in February and Mr Barreto is still recovering from horrific burns to 75% of his body.

Mr Barreto’s attorneys said that their client, a Hispanic male, has no prior criminal record and is a valued FedEx employee. They explained that the 26-year-old had been pumping gas for just over a minute when the officers arrived on the scene to confront him. One of the Osceola County sheriff’s deputies then tackled him to the ground. There were at least three other deputy vehicles at the gas station that were surrounding Mr Barreto and his bike while he was pinned on the ground before a standing officer deployed his taser on the man.

“As Mr Barreto was knocked over from behind, by this surprise take down [sic] from a then-unknown force, his dirt bike also went down, spilling gas over Mr. Barreto and the Deputy,” the caption of the post read.

This led to a fiery explosion at the Wawa gas station, engulfing most of Mr Barreto’s body in flames. The deputy who tackled the 26-yar-old also suffered third-degree burns to half of his body. Mr Barreto’s lawyers said that the fireball, “caused by the reckless, foolish, unnecessary tasing,” left four people injured, among them three deputies. They also claimed that Mr Barreto was “cooked alive” in the flames.

Even after three months, Mr Barreto is still undergoing “excruciating” treatment, the attorneys said, adding that their client’s skin has been burned off. They informed that Mr Barreto has had six gruelling surgeries to graft the new skin onto his body. In the coming days, he will be placed in a medically induced coma in order to remove necrotic tissue from his body in preparation for a groundbreaking procedure at Orlando Health, which has been growing skin tissue taken from a 4-inch patch of unburned skin, to hopefully commence grafting.

“While being cooked alive, Mr. Barreto sustained third-degree burns on approximately 75% of his body, front and back from his feet to the bottom of his neck,” the lawyers added.

Further, as per Independent, the law office is yet to receive body-worn camera footage from the Osceola County Sheriff’s office, nor they have been granted access to the incident reports. They have also requested the US Department of Justice to open an investigation into the practices and protocols deployed by the Sheriff deputies employed by the Osceola County Sheriffs’ Office.

Meanwhile, according to the Florida state fire marshal’s investigation report, an electric discharge from the deputy’s Taser was the likely cause of the fire. But the report also found that the fire was ignited by accident.